DAILY DOSE OF DVAITA : Dissection of Dreams as per Tattvavada
(Empirical analysis of dreams based on proofs from scriptures – also see attached image)

Are dreams real? Dvaita says so. Svapna is satya. What does it mean actually?

Just like clay is the material cause (उपादान कारण) for the creation of a pot by the potter, so does the mental samskara of a person becomes the material cause for the creation of dreams by God. The creator is always God. He is the destructor too. The creation happens as one slips into sleep. It is destroyed when one slips into deep sleep. Since the dream is made of vasanas of countless lives of past and present one, they don’t have the grossness of external ingredients (panchabhutas) making up the objects around us. This perhaps applies more so for the one category among the seven identified in this note. But majority of dreams people get also happens to be in that category (See Objectification of Desires below).

Some people say dream is real. But the experience is illusion. This statement has no basis and goes completely against the very definition of reality of dream. As said earlier, the very statement that the dream is real means the fabric making up the dream is derived from mental vasana and hence real intrinsically.

A person in this world goes through 3 states (avastaa) – wakeful, dream and deep sleep(jaagrut, svapna and sushupti). The states are controlled by the 3 forms of Lord named Vishwa, Taijasa and Prajna respectively residing in right eye corner, neck and heart.

But the dream is real does not mean that the objects in dream can be mapped to the similar looking objects in waking state. That would be a mistake. As BNK puts it aptly – the element of falsity of dreams lies not in the constitution of dream objects (or their interplay) but in their being mistaken for waking state realities.

Objects that we see during the dream are created by god out of vasanas.They can be sensed only when dreaming.So there is no way one can visualize them while they are awake.

Sri Jagannatha Dasa further says in Harkathamruta saara (3-8) that Vishnu divides the chid-sharira (soul) into parts even for a niramsha jeeva (one that generally cannot be broken into parts) using Vishnu’s achintya adbhuta shakti and allows them to enjoy the pleasures.

Not all dreams are result of vasana. The attached picture provides the classification of dreams into 7 categories based on empirical evidence from Itihaasa Purana, Pramanas and documented incidents from Guru Parampara of Dvaita.

As each category is spelt out, relevant pramana are also posted and they concur with common observation and logic.

CATEGORY I. Objectification of desires, wishlist, fear and samskaara/vasana of this and/or previous lives

This is then most common reason of the dreams for most people.
Mahabharata Shanti Parva provides many details about dreams in this first category of dreams. Chapter and shloka numbers in parenthesis.

1. It says that the rajasic and tamasic attributes of a person create the desires. [216-2]
2. It also takes in its “vishaya” during wake state. During dream, the sense organs (desiring the satisfaction), dissolve in mind (manas) but the mind hasn’t yet dissolved in intellect (buddhi). Hence the mind alone will be enjoying the sensual pleasures emanating from the sense organs which have dissolved in it (from sensory perspective). [216-3]
3. It also goes on to say a person who is earnestly pursuing his deisres through sensory organs and mind in waking state also gets his dreams through which such desires of mind are satisfied [216-7]
4. It further clarifies that such dreams are not only desires of the desires in waking state of the time immediately preceding the dream but also due to samskaara anytime from this life or any of the countless previous lives. [216-8]
5. Shanti Parva says that one without atma jnana (beginning stage of the onset of bimba aparoxa jnana) is not able to control the occurrence of dreams resulting from rajasic, tamasic desires. [216-11]

These are special types of dreams where a certain miracle plays out. It is certainly not a byproduct of the mental samskara but an occurrence due to God’s iccha shakti.

Examples are of Vijayadasa and Prasanna VenkataDasa getting their ankita.

A further variation occurs here when the soul that is dreaming an actually occuring incident, happens to travel in the physical (panchabhautika) plane to the spot of occurrence of the event where the dream is happening!!!!

There is an example of this in Mahabharata Tatparya Nirnaya where on the night Abhimanyu is killed in the battlefield, Sri Krishna takes Arjuna to Kailasa to get Pashupata and also addition protection. Krishna could have done this in the waking state. But the achintya-adbhuta shakti of the Lord is such that Krishna takes Arjuna to Kailasa as is in Arjuna’s dream itself. Thus effectively an astral transport occurs with the just in time incident in the dream!! Strange but true with God showing his “anyathaa kartum” capability justfor us.

The Prarabda sankocha is another special type of dream. Suppose a person is lose his body part in accident. But the person is a great devotee. He/she does their anustana with highest devotion. Then the grace of Lord is such that, the person is made to lose that body part in an accident dream thereby preventing the actual occurrence of the event in wakng state. When seen in this fashion there is ample thinking space for us to feel that all bad dreams are not really bad. They are a mechanism by God for the virtuous to get rid of bigger prarabda through a minor mental discomfort through dreams.

When Rayaru in his Purvasharama is having dilemma on accepting sanyasa from Sri Sudhindra Teertha and become the next peetadhipati, he gets the dream where Sarasvati herself comes and tells him to accept the peeta establish the tattva. The rest is history. Notice that Rayaru was an aparoxa jnani right from being Prahlada. He has full control over the dreams that emanate from mental desires (as he is free from it) as stated in Mahabharata Shantiparva. Hence this dream is not a byproduct of desire at all, but an order from the devi.

These are perhaps the second most popular category among dreams. And it is this that people pursue dreamologists for svapna-phala. An important point to note here is that the soochaka dreams do not play out the exact sequence of events from future. Rather they are indicators. BrahmaVavarta Purana has a good chunk set aside for describing the phala of dreams.

For instance. If one sees a cow in the dream then it means they get real estate etc.

The dream event itself need not be pleasant to indicate a pleasant result. For ecample if one appears to be hounded by wildboar, monkeysetc. the dreamer might become king or get lots of money.

As can be seen, it is hard to distinguish if the dream is
a. phala soochaka or
b. A result of ones samskara.

A person hounded by monkeys in waking state will develop the monkey phobia and that may recur in dreams. That is not a indicative dream of he becoming rich. Thus it gets really tough to categorize the dream

One interesting aspect of soochaka dreams yielding good results is that if the dreamer spells it out to anybody else, the dream will not come true!! This is also said in Brahma Vaivarta Purana.

These are also a special category dreams visualized by the exalted aparoxa jnanis. As Sri Vadiraja says in Lakshmi Shobhana, he authored it in his dream. ‘

Later he used to nullify the effect of poison of a groom. Svapna Pada on the other hand, was told by Narayana to Sri Vadiraja. These are not mental projections but as-is examples of philosophy being propounded. Similarly Svapna Vrundavanakhyana is also described through dream.

Even though indicative dreams are about future, they are not a play-out of actual future incident. They are rather a hint. But in few cases in itihasa purana and history, there is documentation of actual incident from future being played out in dream.

1. Sri Akshobya Teertha gets the dream that whoever tries to drink water when riding the horse will next ascend the peeta. It turns out to be Sri Jayateertha

2. In Bhagavata, Usha, the daughter of Banasura sees a prettyprince in her dream. The next day her maid paints out all known princes, she finds that the person dreamt by Usha is none other than Aniruddha, the grandson of Krishna.

Dreams and Vishnu
================
Vishnu, the independent controller of everything that exists and does not exist also controls the dreams. He creates them and destroys them. For those of his devotees he chooses, he can reduce their prarabda by giving a bad dream. He can eliminate the bad dream by virtue of being praised as dusvapna-naashana in Vishnu Sahasra nama. He also uses the dream as a mechanism to play out varieties of miracles and indicate the future. He also uses it to delude peple as per their prarabda. His capabilities is unimaginable. We hope all of us ruminate on the dreams and Vishnu’s role in it as Taijasa, the 19 headed God with one elephant head in between. May all people see Vishnu in dreams. A dream with Vishnu is always a good dream even if it emanates from the intense desire and samskara of that person. 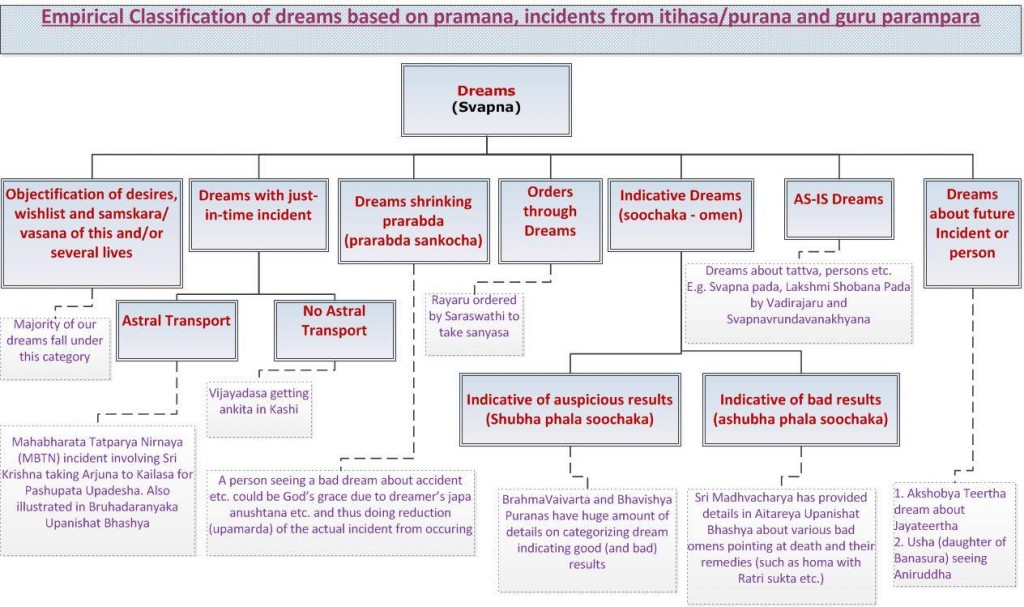